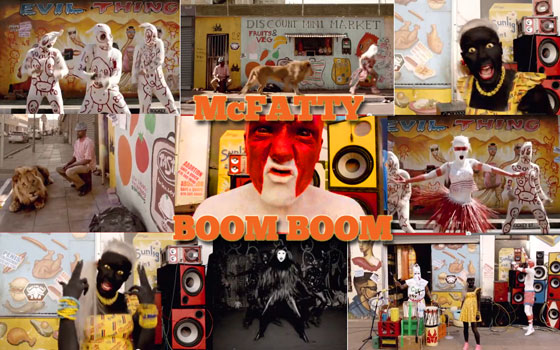 Ag pleez deddy won’t you take me to South Africa! Yes pal, not to see bafana bafana play in the Africa Cup of Nations, no bro, I gottee catch up with ma pals Ninja and Yo-Landi from Die Antwoord!
Back in the day when I was spinnin’ some rave toons in Jo’berg I heard a young rapper spittin’ mad bars over some sick hip hop beats at street level. I could tell that young gun rapper had mad skillz on the m.i.c so I got him to record some vocals for a McBangin rave remix I was working on. Well, that young gun rapper was none other than Ninja from Die Antwoord, he told me that he was lookin’ for a new sound and so I turned him onto my scene and said rave was the answer. A light bulb literally flicked on above his head, and he said “ag man, of course, die antwoord!” which actually means ‘the answer’ in afrikaans, and the rest as they say is McHistory….
Anyways, check the video to their latest toon, McFatty Boom Boom, it’s got a tranny Lady Ga Ga, Lions, Hyenas, Black Panthers, Dentist/Gynecologists, voodoo dancers, mad body paint, Yo-Landi rappinn soprano rhymes, and all set to the mcmental, bangin beats of the kings of SA Rave, Die Antwoord stylee!
GO McMENTAL!

Unable to get tweets
Copyright © Tarnished.